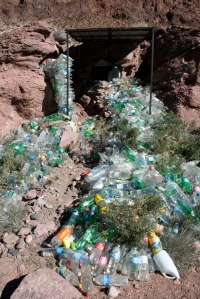 Roadside shrine outside of Mendoza

Shrines to accident victims or saints along the road in Argentina are a very common sight.  A visitor to the country might mistake devotion for excessive littering at times when passing by shrines to Difunta Correa.

While driving from Mendoza to the foothills of the Andes near Uspallata, we passed the largest such shrine we’d see so far.  It’s an interesting sight and story to share. 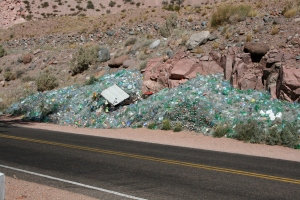 Difunta Correa refers to the legend of a woman who attempted to find her husband during a time of war in Argentina in the 1800’s.  While trailing the marching army through the desert with her baby, she died of dehydration.  Her infant child was found alive, nursing at her breast by traveling gauchos.  Hundreds if not thousands of roadside shrines throughout the country pay homage to Difunta Correa (Deceased Correa) and her thirst by housing piles of full water bottles and other offerings.

Ruta 7 into the Andes from Mendoza is a beautiful, but desolate stretch of highway.  While we probably noticed 10-12 shrines to Difunta Correa on our 2 hour drive, none was larger than this one. 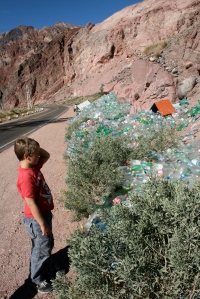 Ben distressed at the waste of water bottles

When we stopped for a closer look at this one, Ben and Molly were upset by the apparent waste of water.  When Erica decided to contribute one of the bottles we’d recently bought, Ben nearly revolted.

Driving in Costa Rica and Argentina has been an adventure at times.  We’ve rented cars a number of times as well as simply being passengers.  It’s provided a very different opportunity to experience the country than can be found onboard a bus.   I’m somewhat fearful for my newfound driving techniques when we return though.  My favorite is the habit of honking upon approach of a 4-way stop with no change in speed, as if to announce, “here I come, out of the way!”