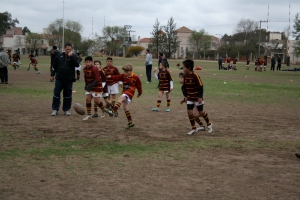 My first rugby game I kicked off and I had fun.  I’ve had 3 practices so far and this was my first game.  I didn’t get a touchdown.  A touchdown in rugby is called a strike and there’s really no pause in the game.  I play rugby because one of my friends invited me to go to one of his practices.  His name is Santi.  From then on I’ve been playing.  We practice on Wednesdays and Fridays and I play games on Saturdays.  I like it because it’s fun and the only rule is don’t talk back and have fun.  The first game was really cold and after the game we ate hamburgers and Fanta.  Everyone is asking me questions about America and Portland and Oregon.  Only two kids on my team speak English, Santi and Ignacio.  We’re going over to Ignacio’s house today to visit and they speak English because they lived in New Jersey for 3 years.  The point of rugby is to pass the ball behind you and you can only tackle from waist to knees and you have to wear a mouthguard.