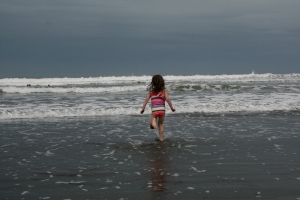 Two weeks down, one to go of Spanish classes here in Turrialba.  We can’t believe how fast it’s gone so far.  Since Erica and I are getting one-on-one instruction, we’re  in class for only 3 hours per day, but still exhausted from the effort.  It’s amazing how much progress we’ve all made (even me!!).  Dana and the folks at www.isls.com are highly recommended.  Despite a rough few days last week from Ben in protest-mode, the kids did pretty well in their classes.  It’s wonderful to see Elliott’s jump into a conversation with our host family to tell them what we did over the weekend.   Boredom in the afternoon is our greatest challenge so far with the boys.  Boredom = crazy boys = crazy parents.  The local pool at the university and a nearby park have been a blessing.

Thursday was a national holiday in Costa Rica in celebration of the annexation of the state of Guanacaste.  All schools, including our language school, were closed on Thursday and Friday.  Before heading out of town for a long weekend, we attended a celebration at Ben and Molly’s school.  The whole week their classes had been practicing traditional dances and songs.  Molly spent the prior night prancing around the house twirling the dress we’d borrowed for her for Ari and Sonia, but much to our surprise, it was Ben who actually followed through and participated in the activities.  Molly claimed to be shy and refused to leave Erica’s ankle.  Rough parenting moment.

Our long weekend plans came together literally the day before we left.  The taxi driver who takes Molly and Ben to their school drove us by van to Cahuita, on the Caribbean.  We had been researching lots of options on the east coast before settling on Nosara on the west coast ultimately for our final week in Costa Rica, so we were excited to still be able to visit, if only for a few days.  It’s about a 2.5 hour drive from Turrialba to Cahuita.  We had been under the impression that Turrialba was hot, until we dropped down off the rolling mountains onto the coastal plain.  Wow, the heat and humidity were incredible.  We stayed at the Siatami Lodge right next to Cahuita National Park. and heard the famed howler monkeys the moment we stepped out of the van.  The bungalow we rented was pretty basic but had a kitchen and mosquito nets, key!  Their coffee and breakfast that came with the rental was great!  Unfortunately this is the rainy season in Costa Rica, and we had about 5 hours of spotty sun over 4 days.  The first night we experienced the most violent thunder and lightening any of us had ever seen.  Somehow Molly slept through it all, but the boys were in our bed seconds after the first thunder crashed right overhead and shook the bungalow.   The proximity to the Park and wildlife drew us to Cahuita, but it tended to be very “backpacker” and a little sketchy in our eyes.  Lots of budget accommodation and just a gut concern on safety.   The restaurant and grocery selections were limited, so we’re glad to be spending a longer spell in Nosara later.  The rain started Thursday night and didn’t stop until late afternoon the following day, which allowed for some beach play despite the clouds.  We scheduled in a trip south to Puerto Viajo by taxi and the Jaguar Rescue Center during a particularly wet Saturday.  The rain and dark made for pretty bad photos unfortunately, but the kids loved it.  We saw sloths, spider monkeys, tons of snakes and birds.   We were escorted in the monkey sanctuary where monkeys actually jump on you!  After Elliott had one pried from his ankle and Molly’s curly hair became too interesting to the monkeys, we had to exit.   The rain let up a little that afternoon again so we could walk to neighboring Playa Negra for a few hours of splashing around, followed by lots of whining about saltwater chafing.  Wouldn’t you know that today, we had the best weather in Cahuita?  We ate breakfast and grabbed our beach gear to finally do a jungle walk in the Park to a beach to play in the sun for a few hours before heading back to Turrialba.  We spotted 3 sloths not 10 minutes into the walk, including a baby!  The ants here are crazy and numerous.  Erica and Molly both were bit just when walking.  Elliott had a monster bite into his flipflop and not let go.

On Saturday we pick up our rental car, say our goodbyes to the Sanchez family, and drive to Santa Ana (just west of San Jose).  We’ll arrive in Nosara the following day after a long drive amid Tico drivers.  Wish us luck.