Traveling to Northern Argentina has always been high on our list of must-see destinations ever since we began planning to live here.  Last week we finally ventured up to Salta and some of the surrounding areas while my Dad visited from Oregon.  Some of our favorite parts of travel is the way it can educate, provide global perspective and disprove preconceived notions.  We had always imagined Salta as a desert land of red rocks and adobe, but instead we were surprised by the vast diversity in people, food and landscape.

Land:  Salta sits 860 km to the north of Cordoba and about 300 km south of the Bolivian border.  To cap off my father’s visit to Argentina, we’d put together a 10 day tour to Salta and Mendoza before sending him home.  After the short flight from Cordoba, we spent 5 days exploring the city of Salta and neighboring areas such as San Lorenzo, Purmamarca, and San Salvador de Jujuy.  We noticed right away how wrong our ideas about Salta would be as we landed.  The surrounding area is lush and green, with high, arid mountains to the west.  The hills around Salta are a dense jungle-like landscape.  It is only as you head farther north that the more famous imagery of Northern Argentina appears.

We elected to rent a car for a few days in order to take a few day trips from Salta after hearing about how much the region had to offer.  I think my Dad was ready to continue solo onto Bolivia after the long day trip to Purmamarca with 3 kids in a 5 passenger car, but managed to see part of the famous Quebrada de Humahuaca.  In 2 hours we drove from a chaotic city, through dense green hills, into a broad glacial valley, and into the desolate foothills of the Northern Andes.

Food:  In most of Argentina, spicy food is rare.  Not so to the north!  Living in a college town like Cordoba, we’ve had our fill of lomos, pizzas and migas that lack any sort of spice.  I can’t say we’re tired of empanadas though.  Standard fare in Salta and Jujuy includes tamales, humitas, llama empanadas and locro.  Most restaurants also provide picante (sort of salsa and hot sauce mix) to accompany tamales or empanadas.  The tamales are small and round, filled with corn meal and meat, but otherwise similar to what we’d find in Mexico.  Humita is a sweet, corn-based sort of tamale that’s delicious.  Both are wrapped in corn husks and steamed.  We also managed to be in Salta on May 1st, when locro becomes a standard menu item in many restaurants as the weather turns colder.  Locro is a stew of pork, corn and potatoes that varies widely based on the chef.  We’re determined to track down a family recipe before we leave!

People:  It was fascinating to see just how distinctly different the people looked in the north.  Features commonly associated with Peru or Bolivia like high cheek bones and dark complexion stand out in Salta and the north.  The huge influx of European immigrants that diluted the indigenous population in so many parts of the country and makes Argentine people so incredibly diverse has not reached the north.  There’s an incredible quantity of textiles and crafts available in the north as well.  True gauchos are a common sight with their flat brimmed hats or berets, trousers tucked into high leather boots, and red sash at the waist.  So many leather boots might explain the disproportionate number of shoe shiners in the main plazas in Salta.  Sitting in an outdoor cafe on the edge of Plaza 9 de Julio ensured we would have a minimum of 5 shoe shiners stop by to see if we needed a shine, even if we didn’t have on leather shoes.  We also noticed a strong police presence that is not visible in Cordoba.  Pairs of police officers seem to be on every corner.  Check points on the highway were more frequent.  It was a bit unnerving to see so many, particularly ringing the teachers on strike in Plaza 9 de Julio at all hours. 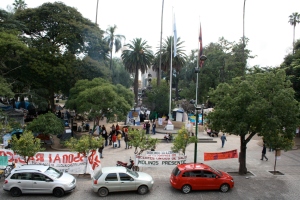 We could have easily spent a month or more in the north and still not seen it all.  Even with one year we are finding that Argentina is too vast to see all of its many wonderful sights.