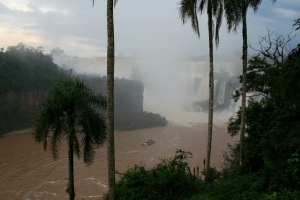 A distant view of Iguazu Falls from the Argentina side

In our advance planning for our year abroad we never spent much time thinking about how we’d return to the US from Argentina. We intentionally left this minor detail open as long as we could because we didn’t want a return date or route to influence our desire to approach our life down south with a total open mind. We left entirely unsure when we’d return other than our initial one-year budget. With no small sense of pride and wonder, my budget came miraculously close to the mark, so back we go to begin earning a living again, and to start the kids in school in September. Deciding on an exit through Brazil came about after prioritizing our bucket list destinations. It’s a big world and a short life. We decided to go home with a bang as long as we were so far south, not knowing when and if we’d ever make it back to Brazil. 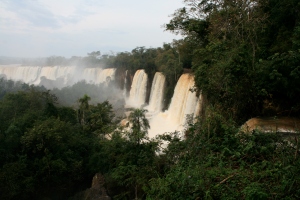 Side view of the Argentine Falls

We spent 2 weeks traveling from Córdoba to Seattle by way of Brazil. It’s a whopper of a route, but could not have been organized, priced or planned better by the travel magician, Brad La Nasa. We can’t recommend Brad and his company Pangaea Travel highly enough. His expertise on travel logistics, airlines and all things Argentina for expats was invaluable. Brad, his wife Lisa, and their two girls served as our inspiration and an Argentine reference library of sorts. We could not have done it without them. Their own blog details their amazing adventures.

Spectacular and wet catwalk on the Brazilian side

We started our trip home by flying to Puerto Iguazu to see Iguazu Falls. As one of the 7 wonders of the world, Las Cataratas certainly didn’t’ disappoint. Some of the viewpoints and catwalks on the Argentine side of the Falls remain closed after extreme flooding earlier this year. We glimpsed battered remains of some catwalks hundreds of feet below on the riverbank. From a planning and pricing perspective, it only made sense to spend a day touring the Brazil side of the Falls as we traveled northwards. 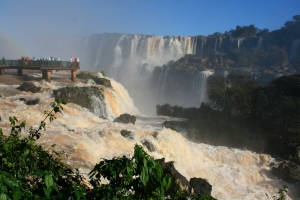 After so long spent in Argentina, it was fascinating to cross into Brazil and immediately notice some differences. Food was spicier and available in greater variety. The kids celebrated after finding Goldfish Crackers in a grocery store. It’s the little things sometimes. Although our time in Brazil was brief, we found Brazilians to be less patient with children as compared to the endless reservoir of patience we witnessed in Argentina. Dinner comes earlier in Brazil and siestas seemed rare. The ever-present Argentine greeting, besos, seemed to sadly disappear as soon as we crossed the border. Brazil is significantly more expensive than Argentina. We could afford no longer than 2 weeks in the country, especially considering our trips and lodging. We also felt less safe in Brazil. The resort we stayed for a week south of Rio had armed guards patrolling the grounds night and day. Hiking outside of the grounds wasn’t allowed without a guide. In our final night in Manaus, as we exited a restaurant, to be told by the armed guard outside to wait inside while he called a cab. We watched inside as he checked the cab credentials before he signaled us that it was safe to enter the car. Incredibly, most Brazilian bathing suits are actually smaller than those of Argentines! Brazilians possess an incredible well of self-confidence, as demonstrated by their beach apparel. We all found the transition to Portuguese from Spanish difficult. The languages can be both similar and incredibly different, but we all found ourselves starting with Spanish over English, despite the fact that many people we encountered didn’t speak Spanish. 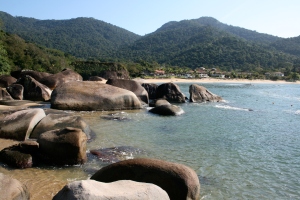 After a wonderfully relaxing week at on the beach south of Rio where the kids made some great new friends, we continued north to the Amazonian city of Manaus. We spent 3 amazing days touring the Rio Negro and Parque Nacional de Anavilhanas on the Lo Peix with the owner, Jordi.  Seeing the Amazon wrapped up our bucket list trip (for now) and was a surreal way to end our travels.  We kayaked and swam in the Rio Negro, fished and ate piranha, caught baby crocodiles by hand, fed monkeys, and walked in the Amazonian jungle!

The Rio Negro at dawn

Acidity, temperature, mineral content and water speed create the Econtro das Aquas, where the Amazon and the Rio Negro converge

We landed in Seattle today, by way of Miami and Dallas. We’ve spent 2 weeks hauling 9 huge bags plus carry-ons on 7 flight legs, countless van and cab rides over 8,777 miles. We’re all exhausted and more than a little shell-shocked to be in the Pacific NW just one day removed from a boat on the Amazon River.

The Lo Peix on the Rio Negro, Manaus, Brazil

Soon we’ll return to Portland where I’ll get the job hunt going in earnest. We’ll move back into our same house, put the boys back in the same neighborhood school, and try to resume our lives following a life changing experience. I think there’s a few more blog posts to be had out of our experiences reintegrating in life and work as we move ahead. More to come.